The purpose of this website and database is not to replicate the objectification of African Americans, South Asians and Indigenous Americans who were brought to eighteenth-century Britain as the enslaved property of white British men and women. Instead we hope that the advertisements collected here will allow readers to explore and understand the people identified in these advertisements as historical subjects in their own right, as individuals who challenged their status and condition. We present the advertisements not with the intention of reproducing the violent circumstances of enslavement, but rather to delegitimise it by enabling readers to recognise the humanity of the individuals whose lives are hidden within a few lines of faded newspaper print.

The current database is version 1.3. The next version, 1.4, will be released in the future.

We are continuing to collect and check advertisements, many of them contributed by other independent researchers, such as Mr Tony Berrett, and when these have all been verified and entered we will issue a new updated version of the database. This is to ensure researchers have a stable dataset to work from, rather than one that is changing every few days or weeks. 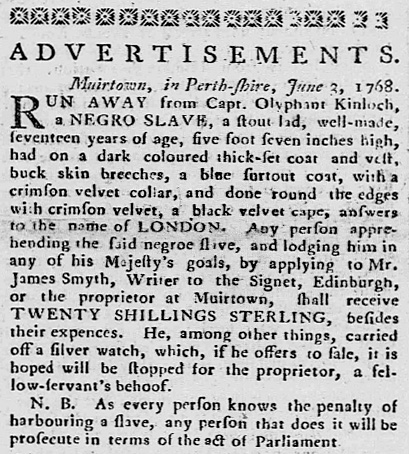